Four more Beryl  bays have been installed in Wymondham to help pedal Norfolk toward a greener future.

The new bays add to the two which were put in place in July as Norfolk County Council aims to increase the availability of sustainable forms of transport and cut the number of cars on the roads.

The Council is working toward the aim of achieving net-zero carbon emissions by 2030 with the UK Government’s ambition to reach the same status by 2050.

Sites at Ketts Park car park, Postmill Close, Harts Farm Road and Tuttles Lane have been provided by South Norfolk Council – which leases the land from Wymondham Town Council - and there are now more than 100 bike bays across the county under a pilot bike, e-bike and e-scooter share scheme run in partnership with micromobility provider Beryl. A fifth new bay will be installed soon at Copper Smith Way in Wymondham and further bays are planned to arrive soon in neighbouring Hethersett as well as more bays within Norwich.

Since Beryl bikes arrived in Wymondham more that 1,800km have been covered by around 450 journeys starting and finishing at the bays in the town. Simply swapping the car for the bike on those short journeys to the shops or to visit a friend can have beneficial impacts to individuals as well as the wider community.

Cllr Robert Savage, who represents Wymondham for the County Council and is also a  South Norfolk Council and Wymondham town councillor,  said: “I am delighted to see the scheme expanding, not just in the town but for the network in general as this will strengthen our work to reduce reliance on motor transport and place greater emphasis on sustainable and more environmentally friendly forms of travel.”

South Norfolk Council Cabinet member Richard Elliott said: “As a Council we understand the benefits of regular exercise and the need to protect the environment. We are really pleased to be able to support this project for more sustainable transport and look forward to people taking the opportunity to get out and about on two wheels without harming the environment.”

Beryl CEO Philip Ellis said: “Our Norwich scheme - with its three modes - is a great example of how delivering a range of services can better contribute towards the aims of an integrated transport network.

“Each type of transport has its own benefits and appeals that complement each other and our introduction of new modes of sustainable transport in Norwich has, each time, led to an increase in the popularity of existing modes.

“I think that this innovation and diversity of choice has been key to the success and has allowed us to expand the scheme and make active travel more accessible to even more people.”

The scheme hit a new milestone in the summer with riders having clocked up more than two million kilometres of travel across the scheme, the equivalent of almost 50 journeys around the Earth.
Feedback from Beryl users* shows that over a quarter (28.7%) of the overall 767,000+     journeys made in Norwich have replaced road transport journeys - including driving a car/van, being a passenger in a car/van, using a taxi or riding a motorbike or moped.

This equates to almost 30 tonnes of carbon dioxide emissions saved; the equivalent of around 1,951,899 boiled kettles or more than 95 flights from London to Edinburgh.**

You can hire a Beryl Bike or an e-scooter through the Beryl app, available for free download on the App Store for iOS, and the Google Play Store for Android users.

Beryl e-scooters can be used on roads, cycle lanes, carriageways and other areas where cycling is permitted but not on pavements. Every Beryl e-scooters has vehicle approval from the Department for Transport (DfT), ensuring it meets the highest safety standards. Beryl has and will continue to consult with key organisations as the trial progresses. E-scooter riders are required to provide a valid UK Driving Licence to participate.

**Carbon saving calculations are approximate and are based on industry research. 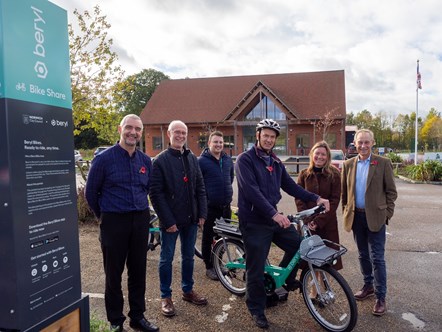