Beryl, the UK’s leading micromobility provider, has today released the results of its annual demographic survey.

Based on 1000 responses from people signed up to Beryl in Bournemouth, Christchurch and Poole, Hereford, Norwich, Watford and the Isle of Wight, the resulting data provides key insights into how people are using micromobility schemes, and trends.

Notably, the survey found that convenience is the most important factor to people when it comes to choosing a micromobility service. 91% of users cited it as ‘very important’ or ‘somewhat important’, followed by cost (88%) and safety (75%). Across Beryl schemes, high percentages of residents live within a short distance of a bay. For example in Hereford, 90% of residents live within a five minute walk of a Beryl bay, this highlights how important it is to ensure that micromobility schemes are easily accessible.

Another finding from this year’s data is the drop in people’s confidence when cycling in traffic. The survey last year was conducted during the height of the Covid-19 pandemic, when the number of cars on the road was significantly reduced, and a range of temporary designated cycle lanes had been introduced. This led to people feeling more confident when cycling on main roads than this year, and this is particularly the case for female riders. 52% of whom said they felt ‘confident’ or ‘very confident’ in 2020, compared to just 38% this year.

This adds to the existing bank of data which shows that quieter roads and better infrastructure are vital in encouraging more people to incorporate active travel into their daily lives. As a company, Beryl will continue to firmly and vocally advocate for the development of safe and continuous cycle infrastructure.

The impact of female riders feeling unsafe on roads is also having a detrimental impact on reducing car usage. This is due to the fact that they are more likely to ride Beryl bikes for leisure and exercise purposes as opposed to for travel. As a result, 30% of men said they had reduced their usage of a private car, compared to 26% of women.

The data from this year’s survey shows that across all schemes, Beryl continues to have a positive impact on reducing traffic, increasing the level of cycling, and encouraging people to try new things. 52% of users said that they are now cycling ‘more often’ or ‘much more often’ since they started using Beryl. 64% of those who already cycled now cycle ‘more often’ or ‘much more often’ and 45% of riders said they resumed again after a break. 2% said they started cycling for the first time ever.

In addition to pedal bikes, Beryl offers riders e-bikes and e-scooters in some schemes. The survey highlighted some interesting ways in which these are being used. For example, those with disabilities are more likely to use electric vehicles, especially e-scooters - with 12% of users saying they have a disability. Additionally, 46% of riders who ride both pedal and e-bikes have reduced their car use, compared to 25% of those who only ride pedal bikes.

Beryl believes that providing a range of transport options has a larger impact on changing user behaviour to increase cycling and reduce car use. They became the first operator to offer bikes, e-bikes and e-scooters in one scheme in Norwich.

Beryl vehicles are also becoming increasingly integrated into the local infrastructure and transport mix. 34% of users have connected with other modes of public transport, and 6% use public transport more often than before.

With its unique mechanisms and technology, Beryl will continue to adopt a data-driven approach to ensure our services are accessible in the areas they’re needed the most.

‘’As the UK’s leading micromobility operator, we know from experience how important data and feedback is in understanding our users, identifying trends and ensuring that we’re providing services that are accessible, and work for everyone.

“The data this year tells us that convenience is vital for increased usage of microbility schemes, and that people’s confidence when riding in traffic has actually dropped from last year.

‘’We will continue to use insight like this to guide our data-driven approach, not only ensuring that our services are accessible in the areas they’re needed the most; but also advocating for the development of greater infrastructure for active travel

“By getting more people out of the car and using our bikes and scooters, we can play a key role in boosting public health and reducing traffic congestion as well as improving air quality and reducing carbon emissions.’’

Link to full survey, can be found here 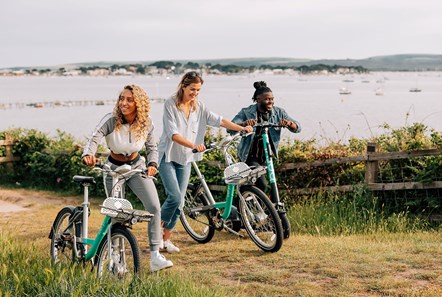